In short, colic is excessive fussing or crying in the young baby who is otherwise well and thriving.

Colic typically presents in the second or third week of life, peaks around 6-8 weeks and gets better by 16 weeks in the vast majority of cases. Crying can occur throughout the day, and peaks in the hours between 6 am and midday, and 6 pm and midnight.

In a crying bout, the infant typically clenches their fists and brings up their legs, leading to the hypothesis that it may be related to gut discomfort.

However, we now know that colic is not only simple gut cramps, and many theories have been postulated to explain the causes of colic, including:

“Sensitive gut, sensitive brain” is how I often explain it. More of that in the next post. 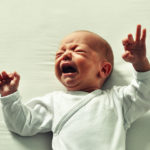 What is normal “crying/fussing” in the first 3 months? 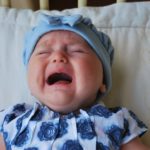 What could be the causes of colic?

How do we manage colic?

What could be the causes of colic?

What is normal “crying/fussing” in the first 3 months?